What is Pure Water? 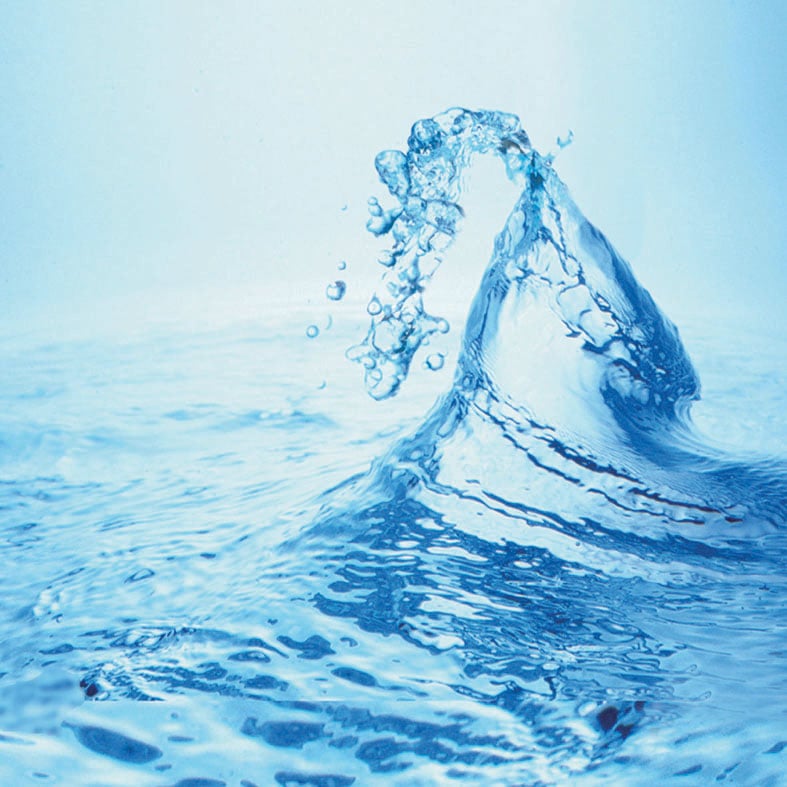 To understand PURE water, let's first discuss all of the impurities that can contaminate sensitive experiments, then we'll address how Thermo Scientific Barnstead water purificiation systems are engineered to remove them.  The table below illustrates the common impurities that impact the applications listed.

Colloidal particles typically have a slightly net negative charge, range in size from 0.01-1.0µm, and can be either organic or inorganic.  Unlike suspended particles, colloids do not settle out by gravity, but remain suspended in the liquid that carries them.  Colloids clog filters, interfere with instrument operation, foul reverse osmosis membranes and can bypass ion exchange resins, resulting in lower resistivity in deionized water systems.

Impurities such as silicates, chlorides, fluorides, bicarbonates, sulfates, phosphates, nitrates and ferrous compounds are present as cations (positively charge ions) and anions (negatively charged ions).  Water with a high concentration of ions will conduct electricity readily and have high conductivity and low resistivity, as conductivity and resistivity are inversely related.  Ions will adversely affect the results of inorganic analyses such as IC, AA, ICP/MS, and may retard cell and tissue growth in biological research.  They can also affect the cartridge life in deionized water systems.

Organic solids are present from plant and animal decay and from human activity.  They may include proteins, alcohols, chloramines, and residues of pesticides, herbicides and detergents.  They foul ion exchange resins, interfere with organic analyses including HLC, gas chromatography and fluoroscopy.  They will also hinder electrophoresis, tissue and cell culture.

Water naturally contains dissolved gasses such as carbon dioxide, nitrogen and oxygen.  Carbon dioxide dissolves in water to form weakly acidic carbonic acid (H²CO³), which can alter the pH of the water.  Additionally, oxygen, the most common non-ionized gas, may cause corrosion of metal surfaces.

Bacteria, fungi and algae are found in all natural water souorces.  Chlorinatin eliminates harmful bacteria, but tap water still contains live microoganisms which interfere with sterile applications, such as cell and tissue culture.

Pyrogens or bacterial endotoxins are lipopolysaccaride molecules incorporated in the cell membrane of gram negative bacteria.  Viruses are considered to be non-living nucleic acids.  Both can adversely affect laboratory experiments often hindering cell and tissue growth in culture.

RNase and DNase are naturally occurring enzymes that are instrumental in regulating bodily functions.  As important as these enzymes are to the life process, they can be devastating to nucleic acid experiements.  If these contaminants are present in the pure water used the ability to amplify DNA molecules will be severely limited.  Likewise, experiments utilizing RNA can be ruined.

Water purification is a step-by-step process often requiring a combination of technologies, each of which varies in it's ability to remove specific contaminants.

The table below illustrates which impurities are removed by each technology.

Distillation has the broadest removal capabilities of any single form of water purification.  Water is boiled and undergoes phase changes during the distillation process, changing from liquid to vapor and back to liquid.  It is the change from liquid to vapor that separates the water (in various degress) from many dissolved impurities, such as ions, organic contaminants with low boiling points (<100ºC / 212ºF), bacteria, pyrogens, and particulates.  Distillation can not be used on its own to remove inorganic ions, ionized gases, organics with boiling points higher than 100°C, or dissolved non-ionized gases.

Depth filters are most commonly used as a pretreatment and are manufactured by winding fibers around hollow and slotted tubes.  As water passes through the wound fiber matrix toward the center tube, particles are retained on the fibers.  Traditionally this type of filter removes most of the impurities above the rated pore size of the filter.  Most often these filters are rated to remove larger particles (>1 µm) to protect the technologies that follow.

Membrane filters are often termed absolute, meaning that they are designed to remove all particles above the rated pore size of the filter.  These filters use a membrane (in flat sheet or hollow fiber form) and are most often used at the end of a system to remove bacteria or other particles that are not removed by the preceding technologies.  Traditionally membrane filters in laboratory water systems have a rated pore size below 0.45 µm, most often to 0.2 µm.

•  Maintenance is change out only

In water purification, ultrafiltration is used to remove pyrogens (bacterial endotoxins) and nucleases, which is critical for tissue culture, cell culture and media preparation.

Ultrafilters use size exclusion to remove particles and macromolecules.  By design, ultrafilters operate similar to reverse osmosis membranes; particles are captured on the surface of the membranes and are flushed from the membrane via a reject stream.  Ultrafilters are used at the end of systems ensuring the near total removal of macromolecular impurities like pyrogens, nucleases and particulates.

•  Helps to remove pyrogens and nucleases

•  Will not remove dissolved inorganics, dissolved gases and organics

Reverse osmosis is the most economical method of removing up to 99% of your feed water's contaminants.

In water purification systems, external pressure is applied to the more concentrated (feed water) side of the membrane to reverse the natural osmotic flow.  This forces the feed water through the semipermeable membrane.  The impurities are deposited on the membrane surface and sent to drain and the water that passes through the membrane as product water is, for the most part, free of impurities.

A reverse osmosis membrane has a thin microporous surface that rejects impurities, but allows water to pass through.  The membrane rejects bacteria, pyrogens, and 90-95% of inorganic solids.  Polyvalent ions are rejected easier than monovalent ions.  Organic solids with a molecular weight greater than 200 Daltons are rejected by the membrane, but dissolved gases are not as effectively removed.

Due to the restrictive nature of the membrane, the flow rate is much slower than other purification technologies.  This slow flow rate means that all RO systems require a storage tank to provide a constant supply of RO water ready when you need it.

•  To varying degrees, removes most types of contaminants, bacteria, pyrogens, and 90-95% of inorganic ions

•  Does not remove dissolved gases

Deionization is also referred to as demineralization or ion exchange.  The process removes ions from feed water with the use of synthetic resins.  These resins are chemically altered to have an affinity for dissolved inorganic ions and are divided into two classifications: cation removal resins and anion removal resins.

Cations have a positive charge and include sodium (Na+), Calcium (Ca+²), and Magnesium (Mg+²). Anions have a negative charge and include chloride (CI-), sulfates (SO4- ²), and bicarbonates (HCO- ²). The ions are removed from the water through a series of chemical reactions.  These reactions take place as the water passes through the ion exchange resin beds.  cation resin contains hydrogen (H+) ions on the surface which are exchanged for positively charged ions.  Anion resin contains hydroxide (OH-) ions on its exchange sites which are exchanged for negatively charged ions.  The final product of these two exchanges is H+ and OH-, which combine to form water (H²O).

Deionization is the only technology which produces the resistivity requirement for Type 1 reagent grade water.  In laboratory water systems, cation and anion resins are most often mixed together allowing them to achieve maximum ionic purity.

Two bed deionization - The cation and anion resin are in separate halves of a cartridge.  In general, this method is less effective deionizing water as compared to the mixed bed deionization, however, it is more tolerant of other types of impurities.

•  Produces product water with a resistivity above 18Ω-cm

•  Does not remove organics, particles, pyrogens or bacteria

Adsorption uses high surface area activated carbon to remove organics and chlorine from feed water.  It is used as a first or second step in most water purification systems and may be used as a final step, in combination with ion exchange resins, to achieve ultra low Total Organic Carbon (TOC). Organics and chlorine adhere to the surface of the activated carbon and remain attached to the carbon.

•  Will not remove ions and particulates

Photochemical oxidation with ultraviolet light eliminates trace organics and inactivates  microorganisms in feed water.  THe UV lamps in our pure water systems generate light at two wavelengths, 185 and 254 nm.  The light generated at 254 nm has the greatest anti-bacterial action, reacting with their DNA, resulting in inactivation.  The combination 185/254 nm light oxidizes organic compounds, allowing for total oxidizable carbon levels of less than 5 ppb.

•  Will not remove ions, colloids, and particulates

The use of ultraviolet oxidation and ultrafiltration technologies in conjunction with adsorption and deionization in the same system produces water virtually free of all impurities.  These technologies have demonstrated the ability to remove nucleases such as RNase and DNase as well as pyrogens when challenged with known concentrations of the material.  The Type 1 systems with UV/UF options produce reagent grade water with resistivity up to 18.2 MΩ-cm, TOC of 1-5 ppb, pyrogens <0.001 EU/ml and no detectable RNase, DNase or DNA.

•  Must be used in the same system

Subscribe to our newsletter & get alerts on our latest promos and products.